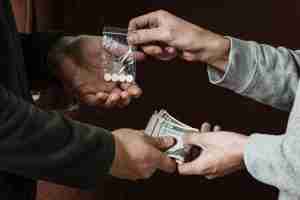 This is the next post in a series of articles discussing defending against drug trafficking charges in Peoria, Illinois. My previous post provided an overview of the topics to be discussed throughout this series. It also emphasized the importance of retaining an attorney who has criminal defense experience to represent your interests. Drug trafficking convictions carry significant criminal penalties, including jail time, fines, a permanent criminal record, and other long-term consequences to one’s life and livelihood. In this post, I will provide an overview of Illinois law regarding drug trafficking. If you have been charged with a drug-related crime, contact my office as soon as possible to speak with a lawyer.

The Illinois Controlled Substance Act (720 ILCS 570/401.1) states that a person who knowingly brings or causes someone else to bring controlled substances into the state for purposes of manufacturing or delivery is guilty of trafficking. It is a common misconception that trafficking charges are reserved for major dealers who are busted with large amounts of drugs. Notably, however, the statute does not include a reference to any minimum amount of drugs when defining the crime. This is because possessing or transporting even small amounts of illegal drugs may lead to trafficking charges. The Act prohibits the trafficking of controlled substances, such as heroin, fentanyl, cocaine, morphine, and certain other regulated prescriptions that are possessed illegally. It is important to note that cannabis trafficking charges are governed separately by the Cannabis Control Act (720 ILCS 550/5.1) and not addressed in this post.

The penalties for those convicted of trafficking controlled substances are severe. Sentences are double the minimum punishment that the defendant would have received for possession with the intent of manufacturing or delivering the type and amount of the drug in question. For instance, a person who is convicted of possession of 100 grams of heroin with the intent to deliver the drugs to someone else would be charged with a Class X felony. The defendant would face between 6-30 years in prison and up to a $500,000 fine. If the same person was charged with trafficking because they brought the 100 grams of heroin into the state, the defendant would face between 12-60 years in jail and a maximum fine of $1,000,000. Regardless of the type and amount of drug in question, trafficking is a felony offense. In addition to incarceration and financial penalties, a convicted felon will be prohibited from possessing a firearm in the future and may face difficulties obtaining housing, jobs, professional licenses, and accessing credit.

If you have been accused of drug trafficking, contact my office today to speak with a defense lawyer. We also service the cities of Bloomington, Decatur, Eureka, Galesburg, Morton, Normal, Pekin, Springfield, and Washington. We also serve the counties of Fulton, Knox, LaSalle, Marshall, Mason, McLean, Putnam, Rock Island, Schuyler, Stark, Tazewell, and Woodford. Additional areas where we handle federal cases include Benton, Chicago, East St. Louis, Springfield, and Urbana.