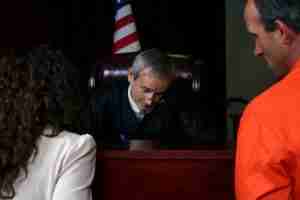 This is the fifth post in my series on the handling of domestic violence charges in Peoria, Illinois. My last post discussed the importance of pretrial motions in domestic assault cases. It is important to understand that motion practice can have an important impact on the outcome of a case. In this article I will be dealing with another important topic – the question of “should I plead guilty to domestic violence?” I cannot stress enough that a guilty plea, to any offense, will have a dramatic impact on your life. If you find yourself facing charges then it is crucial that you contact a criminal defense attorney immediately.

There are several factors which go into the decision of whether or not one should plead guilty to domestic violence. One of the most important considerations is whether or not the case is defensible. By this I mean that a defendant should consider whether they have a chance of gaining a “not guilty” verdict. There are two possibilities which I will discuss in turn.

Defendants who have the possibility of gaining a not guilty verdict typically have more reason to not accept a plea deal. It may be that they face domestic violence charges which are based on false allegations, that the victim may have changed their story, or that they have a legitimate claim of self defense. If any of these are the situation then going to trial may very well be the preferred course. While pleading guilty may seem more convenient, it can have a devastating impact on one’s future.

Defendants who face an “open and shut” case typically have more reason to accept a plea offer. If you are likely to be convicted then you would want to do so through an agreement rather than through the trial process. If the case goes to trial then the Judge is likely to impose a harsher sentence than what you likely would have received through a plea deal. By accepting a plea deal you may serve less time in jail and have lower fines.

Peoria defendants should never plead guilty to any offense without first speaking with a lawyer. I handle such matters throughout the area. In addition to Peoria, I service the cities of Bloomington, Eureka, Galesburg, Morton, Normal, Pekin, Springfield, and Washington. I handle cases in the counties of Fulton, Knox, LaSalle, Marshall, Mason, McLean, Putnam, Rock Island, Schuyler, Stark, Tazewell, and Woodford. I also handle federal cases in Urbana.

Many plea deals in domestic violence cases result in the accused being placed on an informal probation. This means that you will be sentenced to a term in jail and, as long as you stay out of trouble for a required period of time, you will not have to actually be incarcerated. Should you be arrested for another offense, however, then you will often have to serve the original jail sentence in addition to any time required under the new charge. One factor to consider when deciding whether or not you should plead guilty is your chances of completing probation successfully. To not consider this issue is a mistake.

Contact my office today if you have questions or if you require legal assistance.