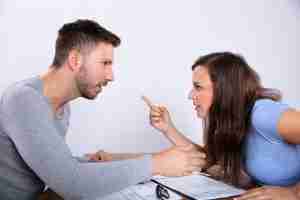 When one reasonably fears imminent harm, either to oneself or others, or physical harm is already occurring, one may defend oneself (or others) with the proportionate amount of force necessary. If a person accused of domestic violence can prove that they were acting in self-defense, this will likely result in the dismissal of criminal charges. In order to claim self-defense, the defendant must present objective evidence demonstrating that they were not the original aggressor in the altercation and that the force used by the defendant was a reasonable response to the initial violence. This evidence may be in the form of eyewitness statements, physician reports, home security camera footage, etc.

Specifically in domestic violence cases, whether the response was a proportionate reaction to the initial threat or violence may become important. Consider the following example. An adult family member has a history of threatening violent harm to his spouse and children. Although he has never actually committed physical violence and no prior reports of domestic violence have been made against him, his family fears for their safety. During one of his tirades, his wife threatens him with a gun to protect herself and children. He alerts the police and claims that she has committed domestic violence. In this case, the wife may assert self-defense to attempt to avoid a conviction. Her counsel will be required to prove the husband’s pattern of abusive behavior and also demonstrate that her threat of violence with a weapon was necessary to defend her family. Depending upon the types of evidence available, such as psychological evaluations of the wife and children or recordings made by security devices in the home, the defense strategy may or may not be successful.

As demonstrated above, the success or failure of a self-defense claim will depend on the facts of the specific case and the evidence available to the parties involved. Engaging a defense attorney immediately will help ensure that evidence can be preserved and gathered in support of your defense. If you have been charged with domestic violence, contact my office today to speak with a lawyer. I also represent clients in Bloomington, Decatur, Eureka, Galesburg, Morton, Normal, Pekin, Springfield, and Washington. We also serve the counties of Fulton, Knox, LaSalle, Marshall, Mason, McLean, Putnam, Rock Island, Schuyler, Stark, Tazewell, and Woodford.