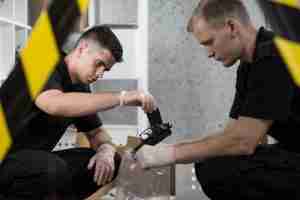 This is the second post in my series on the handling of cases which involve gun crimes in Peoria, Illinois. My last post provided an overview of the topics this series will be addressing. I also stressed the need to contact an attorney if you’ve been charged with a gun crime. In this article, I will discuss various search and seizure issues that often occur in firearm-related cases. If you need assistance, contact my office today to speak with a lawyer.

The state of Illinois has strict penalties for those convicted of crimes which involve firearms. However, all is not lost if you have been charged with a gun crime. It is not uncommon for law enforcement officials to make costly mistakes through the course of their investigation. These mistakes can often result in a dismissal of the charges against you or an eventual acquittal. Gun cases typically hinge on physical evidence such as the firearm itself or statements provided by the accused to an officer. Because of this, law enforcement must abide by the rules and procedures regarding search and seizure to ensure that the evidence will be admissible. Depending on how the evidence was obtained, officers may have violated your Fourth Amendment rights. This also applies to an arrest as well. In some cases, an arrest that is made without probable cause can result in the inability to admit evidence obtained through the course of that arrest. Search and seizure issues even apply after an arrest has been made. If statements were given in violation of a defendant’s Miranda rights, those statements may also be inadmissible. Because search and seizure issues are fact-intensive, it is crucial that you retain counsel immediately if you have been charged with a gun crime.

If your attorney finds that the evidence being used against you was obtained unlawfully, then he or she will file the necessary Motions with the Court. In the case of an invalid search or seizure, a Motion to Suppress will be filed to exclude any evidence obtained as a result of law enforcement’s conduct. The Court will then likely schedule an evidentiary hearing. These hearings give counsel an opportunity to examine the arresting officers and argue for a dismissal of the charges against you. If a dismissal is granted, then a trial is not necessary. However, if a complete dismissal of the charge is not possible, then your lawyer may attempt to negotiate for a favorable resolution of the matter on your behalf.If you or a loved one has been arrested or charged with a gun crime, it is best that you seek representation early on in the process. It is crucial that you speak with a lawyer. An experienced attorney can conduct a thorough investigation of the facts of your case and begin building a defense tailored to your circumstances.

Gun charges are no laughing matter and the penalties for conviction often include lengthy prison sentences. Contact my office today to schedule an initial consultation if you have been arrested. In addition to Peoria, I also serve the counties of Fulton, Knox, LaSalle, Marshall, Mason, McLean, Putnam, Rock Island, Schuyler, Stark, Tazewell, and Woodford. I also handle federal cases in Urbana.