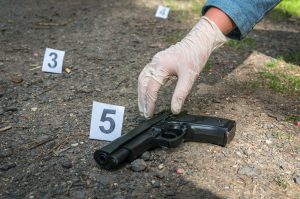 This is the next post in my series on the handling of cases which involve felons who are charged with possessing a firearm. My last article discussed how being on probation limits one’s right against searches by their supervising officer or law enforcement. It is important to understand that there are instances in which a probationer will not have the same rights against a search as do other members of the population. There are, however, still instances in which a probationer can defend against charges of illegally possessing a firearm. It is strongly suggested that you discuss your situation with a lawyer in order to fully understand all of your options. In this article I will discuss instances in which the Fourth Amendment does protect a felon against unlawful searches by law enforcement. If you require assistance then contact my office to speak with a criminal defense attorney.

While those on parole or probation will generally have fewer rights than other members of society, the fact of the matter is that a defendant’s debt to society is considered “paid” once they are no longer under supervision. This means that even those with a prior conviction will enjoy the right to be free from an unreasonable search. Law enforcement, therefore, will not be able to stop such individuals unless they possess “reasonable suspicion” that the person is engaging in, or is about to engage in, some form of criminal activity. Officers may not base such suspicion on a “hunch.” Instead they must base their suspicion on specific facts. Evidence found in violation of these principles can possibly be excluded from the Court’s proceedings.

Say, for example, that the police pull over an individual for a broken tail light or some other traffic infraction. Upon running the individual’s driver’s license, the officers realize that the person is a convicted felon. With no other evidence of criminal activity, the officers order the individual out of the car, search the vehicle, and find a gun inside of a backpack which was sitting in the back seat. Such a search would likely violate the Fourth Amendment. If the defendant is charged with no other conduct, besides the possession of a gun, then there is a chance that the case would be dismissed. It is important to remember, however, that how the Court will rule in any given circumstance is always going to depend on the specific facts of the case. This is why it is important to discuss your situation with an experienced criminal defense lawyer.

If you or a loved one have been charged with being a felon in possession of a firearm then contact my office today to speak with a Peoria attorney. I am a former prosecutor who is familiar with our local court system and I believe that everyone is entitled to a vigorous defense. My firm is ready to assist you. I also serve the counties of Fulton, Knox, LaSalle, Marshall, Mason, McLean, Putnam, Rock Island, Schuyler, Stark, Tazewell, and Woodford. I also handle federal cases in Urbana.