When The Possession Of A Gun Elevates Other Charges In Peoria, Illinois 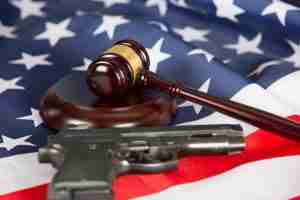 This is the third post in my series on dealing with gun charges in Peoria, Illinois. My last article provided information on search and seizure issues that are commonly associated with firearm cases. I also discussed the importance of retaining a lawyer  early on in this process, as it can be quite fact-intensive. In this article, I will provide information about how the use of a firearm may elevate other charges. Contact my office today to speak with a criminal defense attorney if you need assistance.

As I mentioned in my prior post, there are severe penalties for gun crimes in the state of Illinois. An unlawful possession alone is considered a Class 4 Felony and may result in up to three years in prison. However, the presence or use of a weapon can also have an effect on other charges as well. Common charges that are elevated due to gun possession are:

Defendants charged with these crimes often face severe penalties. Those penalties are greatly increased when a firearm is used or present during the commission of the crime. Crimes that would normally be considered misdemeanors or low-level felonies become significantly more serious when weapons are involved. For example, the crime of simple assault is classified as a Class C misdemeanor under Illinois law. However, if a gun is used during the commission of a simple assault, prosecutors are permitted to elevate the charge to aggravated assault, which can be a Class A misdemeanor or a Class 4 felony. This can mean the difference between 30 days in jail (simple assault) or between one year in jail and six years in prison (aggravated assault). An elevated charge, however, means more than a potentially severe prison sentence. The presence of a gun during the commission of a crime may also result in additional charges, such as being charged with unlawful possession and armed robbery. It is best to seek the counsel of an attorney if you are facing such a situation.

Even if the charges against you have been elevated, an experienced lawyer can help to ensure that your rights remain protected throughout the process. If law enforcement obtained the evidence against you unlawfully then your lawyer can seek to have that evidence suppressed from trial. Furthermore, proof that the possession of the weapon was lawful or unknowing can also help in formulating your defense. These cases often depend on the preservation of evidence and witness statements. The sooner you retain counsel, the sooner the facts of your particular case can be investigated. If you or a loved one has been charged with a crime involving a gun, contact my Peoria office immediately. I also serve the counties of Fulton, Knox, LaSalle, Marshall, Mason, McLean, Putnam, Rock Island, Schuyler, Stark, Tazewell, and Woodford. I also handle federal cases in Urbana.