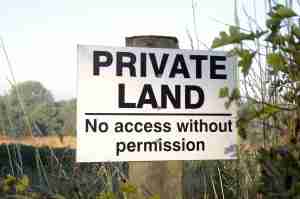 This is the next post in my series of articles on the handling of misdemeanor offenses in Peoria, Illinois. My last article discussed what one faces when charged with petty theft. Defendants should understand that even a “petty” crime can have serious consequences. These can include having a permanent criminal record, an inability to pass a background check, and possibly being disqualified from various professional licenses. If you have been arrested then it is vital that you contact a criminal defense attorney, even if you believe the offense is minor in nature. In this article I will discuss another common topic – the need to defend against trespassing charges. If you or a family member have been arrested, then contact my office to speak with a lawyer.

Trespass charges, by themselves, will often result in probation as long as the conduct was not part of a larger crime, and the accused does not have prior offenses. It is important to note, however, that one will have a permanent criminal record after their sentence is completed. This is something that will show up on background checks, may come up in job interviews, can complicate one’s ability to gain housing, and may also result in other difficulties. If possible, it is best to defend the charge or enter a negotiation which results in dismissal. Such options will typically result in one having a clear criminal record and being able to seal the underlying arrest.

An individual who has been charged with trespass will have options. Under state law, one must “knowingly” be in a location without permission. This means that if the knowledge of trespassing cannot be proven then the accused individual may be able to defend against the charges. Suppose, for example, that one is hiking in a rural part of the state but does not realize that they are on private property. There are no signs marking the property, no fences, etc. From a distance, the owner of the property sees the hikers and calls the police. In the event that law enforcement cited/arrested the hikers, they would likely have a defense that they were not aware that they were trespassing. It is important to remember that how the Court will rule in any given situation is always going to depend on the specific facts of the case.

If you or a loved one have been charged with a misdemeanor then contact my office to speak with a Peoria criminal defense lawyer. I am a former prosecutor who understands the workings of our local court systems. We take pride in the level of service we provide and we are ready to assist you. Contact us today. I also serve the counties of Fulton, Knox, LaSalle, Marshall, Mason, McLean, Putnam, Rock Island, Schuyler, Stark, Tazewell, and Woodford. I also handle federal cases in Urbana.