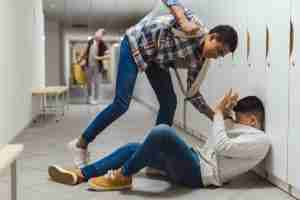 This is the next post in a series of articles discussing defending against specific juvenile criminal charges in Peoria, Illinois. My previous post focused on gun-related charges. Prosecutors and Judges alike take gun offenses seriously, whether the accused is a child or an adult. While the juvenile system typically favors rehabilitation of the youth over more severe punishments, such as incarceration, crimes of violence are more likely to result in detention in a juvenile facility or, in extreme cases, being placed in the adult criminal system. It is imperative, therefore, to vigorously defend against such charges with the assistance of an experienced criminal defense attorney. In this post, I will discuss juvenile assault and battery charges. If your son or daughter has been charged with a crime, contact my office today to speak with a lawyer.

An individual who threatens to harm another or attempts to cause someone physical harm, whether successful or not, can be charged with assault and battery. This applies to juveniles as well as adults. Even the smallest of altercations can result in an arrest for assault and battery. Unfortunately, it is not uncommon for fights between young people to escalate and result in criminal charges against them in the juvenile system. Depending upon the seriousness of the event, level of violence, and whether a victim was injured, assault charges can result in severe consequences for a child who is found guilty. If a weapon was present or used during the altercation, the charges will be treated even more seriously. While the primary goal of the juvenile criminal system is to correct a youth’s behavior and attempt to put them back on the right path, violent crimes such as assault and battery are more likely to result in incarceration than non-violent juvenile offenses. It is important to understand that it may be possible to defend against such charges.

Common defenses against assault and battery charges include self-defense, violations of one’s Fifth Amendment rights, and the right to be free from overly suggestive eyewitness identifications. Consider the following example. A group of teens are shopping at the local mall when several other youths approach them and begin taunting them. They particularly focus on one young woman and begin threatening her with physical violence. A young woman from the second group approaches her and shoves her repeatedly attempting to provoke a fight. After several shoves and continued threats, the first young woman retaliates by punching the second young woman in the face. A store clerk witnesses the punch and notifies security and law enforcement. Based on the witness’s account, the police arrest the punching girl for assaulting the other. Because she was mistaken as the initial aggressor, the first young woman may be able to claim self-defense. The availability of any defense will depend upon the specific facts of each situation. An experienced criminal attorney can assist in identifying possible defenses in your case.

My office has extensive experience representing juveniles who have been charged with assault and battery and is ready to assist you. In addition to Peoria, we also serve clients in Bloomington, Decatur, Eureka, Galesburg, Morton, Normal, Pekin, Springfield, and Washington and the counties of Fulton, Knox, LaSalle, Marshall, Mason, McLean, Putnam, Rock Island, Schuyler, Stark, Tazewell, and Woodford. Areas where we handle federal cases include Peoria, Springfield, Champaign, and Rock Island.