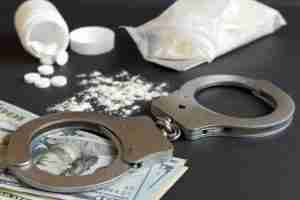 This is the next post in a series of articles discussing defending against various types of felony charges in Peoria, Illinois. My previous article focused on handling felony domestic violence charges. Domestic violence is a serious offense and convictions result in potentially severe penalties, which may include incarceration. It is imperative to discuss your case with a criminal defense attorney to determine how best to defend against the charges. In many cases, for instance, the accused may have been acting in self-defense or may have been falsely accused of engaging in such behavior. Presenting evidence of such defenses to the Court is essential. In this article, I will discuss issues that often arise when defending against felony drug charges. If you have been arrested and charged with a felony, contact my office as soon as possible to speak with a lawyer.

Under Illinois law, certain serious drug-related offenses are punishable as felonies. Such offenses include drug possession when the accused is found with Schedule 1 drugs, large amounts of marijuana, prescription drugs, and drug trafficking of any kind. The penalties for felony drug convictions are severe. Under Illinois law, for example, trafficking between 1-15 grams of cocaine is a Class 1 felony, punishable by up to a $500,000 fine. Trafficking any amount over 15 grams of cocaine is a Class X felony. Potential jail time for amounts between 15-100 grams ranges from 12-60 years, between 100-400 grams ranges from 18-80 years, and so on. In addition, each Class X felony is subject to a fine of up to $1,000,000. Convicted felons also face the life-long consequences of their actions which may prevent them from finding a job, housing, possessing a firearm, etc. It is possible, however, to avoid conviction by asserting defenses against such charges. For instance, drug charges often hinge on evidence obtained by police in violation of the accused’s Fourth Amendment rights against illegal searches and seizures, such as unjustified traffic stops followed by unwarranted vehicle searches.

Consider the following. The police have received several complaints from neighbors about drug activity in the area. They notice a young man driving through the neighborhood who seems to be lost and pull him over, even though he has not violated any traffic laws. During the stop, the driver has no good explanation for being in the area and the police ask him to exit the vehicle. They do not find any illegal items on the driver during a pat down nor do they see anything illegal through the windows of the car. They proceed to open the trunk and find illegal drugs in a suitcase, resulting in a drug trafficking arrest. The Fourth Amendment requires law enforcement to have a legitimate reason for pulling someone over or probable cause that criminal activity is occurring. The justification for the stop must not be a mere pretext for stopping the vehicle. In this case, it may be possible to argue that the stop was merely an excuse to search the car. During a valid traffic stop, the police may ask the driver to exit the vehicle and frisk them without a warrant. In addition, the officer may seize any items in plain sight and search the area in the driver’s immediate vicinity. In this example, no illegal drugs or weapons were detected. In any case, police are generally required to obtain a search warrant before examining the contents of a trunk of a stopped vehicle. The accused’s defense attorney may present evidence of the infractions in a Motion to Suppress the illegally obtained evidence. If the search is determined to be illegal, some or all of the evidence may be excluded, which may result in the dismissal of the drug-trafficking charges.

Search and seizure defenses are highly fact-specific and can involve complex legal arguments. It is essential to consult with an attorney with the experience necessary to represent your interests. Contact my office today to speak with a criminal lawyer. In addition to Peoria, we also serve clients in Bloomington, Decatur, Eureka, Galesburg, Morton, Normal, Pekin, Springfield, and Washington and the counties of Fulton, Knox, LaSalle, Marshall, Mason, McLean, Putnam, Rock Island, Schuyler, Stark, Tazewell, and Woodford. Areas where we handle federal cases include Peoria, Springfield, Champaign, and Rock Island.