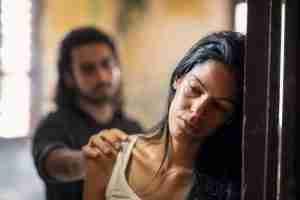 This is the next post in a series of articles discussing defending against specific types of felony charges in Peoria, Illinois. My previous post focused on felony theft charges and possible defense strategies in such matters. Available defenses will, as always, depend upon the specific facts of each case. For instance, whether law enforcement officers violated the accused’s rights in connection with searching for or seizing evidence in violation of the Fourth Amendment, or have used overly suggestive practices in eyewitness identifications of the defendant, will be highly fact specific. It is important, therefore, to retain an attorney knowledgeable in these matters and with the skills necessary to identify and establish all viable defenses against the charges. In this article, I will discuss defending against felony domestic violence charges. If you need assistance, contact my office today to speak with a lawyer.

Under Illinois law, committing battery against a family or household member is considered domestic battery. If the aggressor causes serious physical harm to the victim, a weapon was present during the incident, or if the accused is a repeat offender then the defendant will likely face felony domestic battery charges. The penalties resulting from a felony domestic battery conviction are significant. For instance, aggravated domestic violence may be charged as a Class 2 felony resulting in mandatory incarceration. If a firearm or other weapon is present or used in the dispute, the charge may be elevated to a Class 4 felony, punishable by one to six years in prison. It is possible, in many cases, to defend against accusations of domestic violence. Given the magnitude of the potential consequences of a conviction, it is imperative to retain counsel who will thoroughly investigate the charges, listen to your side of the story, and vigorously defend against such charges.

It is particularly common in domestic battery cases for the accused to have been acting in defense of themself or of other family members who may have been at risk of harm from another member of their household. When a person reasonably fears imminent harm, either to themself or others, or physical harm is already occurring, they may employ a proportionate amount of force as necessary to defend themself. Proving self-defense will likely result in the dismissal of criminal charges. For example, a mother has a history of threatening her children with and actually spanking them with a belt. During a heated altercation with one of her younger children, she actively threatens to strike him and her spouse steps in and shoves her in the child’s defense. She is injured by the shove, alerts the police, and claims that her spouse has committed domestic violence. In this case, because the spouse was not the initial aggressor and was acting with proportionate force to protect the child, the spouse may assert self-defense to attempt to avoid a conviction. The success or failure of a self-defense claim will depend on the facts of the specific case and the evidence available to the parties involved. Engaging a defense attorney immediately will help ensure that evidence can be preserved and gathered in support of your defense.

I have extensive experience representing residents who have been accused of domestic violence and am ready to assist you. Contact my Peoria office today to speak with a lawyer. In addition to Peoria, we also serve clients in Bloomington, Decatur, Eureka, Galesburg, Morton, Normal, Pekin, Springfield, and Washington and the counties of Fulton, Knox, LaSalle, Marshall, Mason, McLean, Putnam, Rock Island, Schuyler, Stark, Tazewell, and Woodford. Areas where we handle federal cases include Peoria, Springfield, Champaign, and Rock Island.