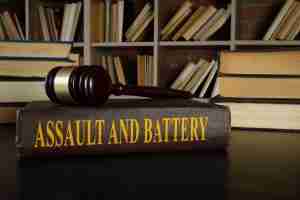 This is the next post in a series of articles discussing defending against specific types of felony charges in Peoria, Illinois. My previous post provided an overview of the topics to be discussed throughout this series. It also stressed the importance of retaining an experienced criminal defense attorney as soon as possible after you have been arrested. Felonies carry stiff criminal penalties including significant fines and incarceration. Furthermore, felony convictions become a part of one’s criminal record and have long-lasting consequences on one’s ability to secure employment, housing, credit, and can preclude individuals from owning or possessing a firearm in the future. It is essential to take all criminal charges seriously and present a vigorous defense. In this post, I will discuss defending against felony assault and battery charges. If you have been accused of such offenses, contact my office to speak with a lawyer.

Assault occurs when one person causes another to experience reasonable fear of imminent harm, such as acting in a threatening manner. Battery occurs when one person actually causes physical harm to another or makes physical contact with another to provoke or menace them. The accused may face felony charges when the conduct is severe. Such severe conduct can include the causing of significant physical harm, the use of a weapon, or harming certain victims such as law enforcement or children. It is important to understand, however, that defendants may have options after they have been arrested. It is not uncommon for a person to be charged with felony assault and battery as a result of a mistaken eyewitness identification, or as a result of being wrongly identified as the initial aggressor. In other instances, one may have simply being defending themselves. It may also be that any charges are premised on evidence gathered by law enforcement in violation of the accused’s Fifth Amendment rights. While the availability of such defenses will depend upon the specific facts of each case, it is imperative to retain counsel who will thoroughly investigate the incident, identify any applicable defenses, and defend you against such charges.

Consider the following example. A large group is gathered at a local sports bar to watch the big game. Groups of fans for both teams have been taunting each other throughout the game and have been heavily drinking. Things get out of hand and a few verbal altercations break out. Toward the end of the game a fist fight between two unruly fans occurs. One party is seriously hurt after being hit with a broken beer bottle requiring medical attention and the police are called. The other patron involved has fled the bar. Police interview one of the employees who provides a description of the initial aggressor. An hour or so later, a man fitting the description of the individual is seen walking in a neighborhood nearby the bar and is stopped by the police – even though he was not actually at the bar. Although he denies having any part in the altercation, he is arrested and charged with felony assault and battery. The witness later mistakenly identifies the accused as the person they believe to have been involved. The defendant’s attorney conducts an investigation, interviews multiple other witnesses, reviews surveillance video, and effectively presents evidence to the jury. If the jury believes that there is reasonable doubt as to whether the accused was actually involved in the altercation then the case would end in acquittal.

The outcome of every assault and battery case will depend upon the specific facts surrounding the incident. Working with an attorney experienced in defending the rights of the accused can help ensure that all potentially exonerating evidence and defense strategies are identified on your behalf. If you need assistance, contact my office today to speak with a lawyer. In addition to Peoria, we also serve clients in Bloomington, Decatur, Eureka, Galesburg, Morton, Normal, Pekin, Springfield, and Washington and the counties of Fulton, Knox, LaSalle, Marshall, Mason, McLean, Putnam, Rock Island, Schuyler, Stark, Tazewell, and Woodford. Areas where we handle federal cases include Peoria, Springfield, Champaign, and Rock Island.