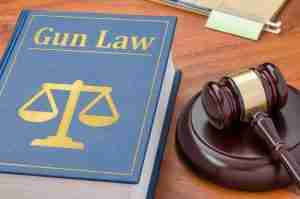 This is the fourth post in my series on the handling of gun cases in Peoria, Illinois. My last article provided information on when the presence of a firearm can elevate another criminal charge. I also discussed how the possession of a weapon may also result in multiple charges being filed. In this article, I will provide information on the federal prosecution of felons who possess guns. If you need assistance, contact my office today to schedule an initial consultation with a criminal defense lawyer.

Both Illinois and federal law prohibits felons from being in the possession of a firearm. Although Illinois felons can face severe penalties under state law, federal charges tend to be much more stringent. It is important to remember that a federal prosecution means that the entire might of the federal government and all of its resources are being devoted to your conviction. The federal prohibition against felons being in possession of a gun is codified in 18 USC § 922(g). That statute describes a felon as one who has been convicted of a felony or who is awaiting trial on felony charges. There are other individuals that may also be prosecuted under this statute, such as illegal aliens, those subject to protection orders or who have been convicted of domestic violence, any fugitive from justice, and military personnel who have been dishonorably discharged. The penalties for conviction of this crime can be up to ten years in prison. However, those with three or more prior convictions involving violent crimes can face up to fifteen years in prison. If you or a loved one have been charged with the federal possession of a weapon, seek representation immediately.

In most cases, once the government believes that a federal crime has been committed then a Grand Jury is empaneled to further investigate the facts. If a grand jury returns an indictment or if a magistrate issues a warrant, you will be arrested and formally charged with the crime if you are not already in custody. You will then attend the arraignment where a plea of “not guilty” or “guilty” will be entered and your counsel will begin the process of constructing your defense. This is why it is crucial that you retain a lawyer right away if you have been charged with a federal offense. Furthermore, not every attorney is licensed to practice law in federal court, so one must take care when selecting representation. If you are currently facing this situation, contact my office today for an initial consultation.