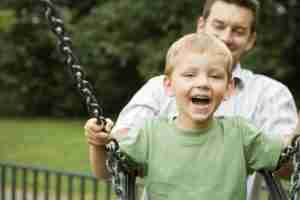 Few things are as stressful as going through a child custody dispute. Such a situation may leave a dad wondering when he will see his children, what the visitation schedule will be, and just what it is the future will hold. When such a situation arises it is crucial that you demonstrate to the Court that it is in your child’s best interests to have a substantial relationship with their dad. I am a Peoria, Illinois fathers’ rights attorney who believes that everyone is entitled to the strongest possible representation. Contact my office today to schedule an initial consultation.

Illinois’ laws regarding child custody are different than those of many other states. For the most part, our state has done away with the ideas of “legal custody” and “physical custody.” Instead, our Courts will now award an “allocation of parenting responsibilities” as well as “visitation time.” First, the Court will decide which parent has decision making authority over issues such as medical care, whether the child enrolls in extracurricular activities, etc. The Judge will then determine a visitation schedule in which each parent will care for the child or children. Courts will typically attempt to give each parent as much time with the child as possible and will try to keep time roughly equal between the two parents; the rights of a father are typically treated as equal to those of a mother. A parent will receive a majority time share, however, if it is found that such an arrangement is in the best interests of the child.

When deciding what is in a child’s best interests, and whether a parent should receive a majority time share, the Court will consider factors such as:

The first step in a custody case is to file a Petition with the Court to initiate proceedings. A Motion will typically be filed in which the initiating parent requests a temporary custody and child support arrangement. Having a temporary order in place allows the parents to know their schedule and obligations while the case is proceeding. Each side will then have a chance to gather evidence which will be presented at trial. If a settlement cannot be reached then the Judge will reach a decision after hearing all of the evidence. Retaining an attorney with experience in such matters can make a substantial difference in a dad’s case.

I am a former prosecutor who stands up for the rights of Peoria fathers in child custody cases. I will use your use your initial consultation to gain an understanding of your situation and I will quickly file all necessary Motions and Petitions. If your case involves an emergency then I will request that the Court hold an expedited hearing. I will argue that you should get as much time with your child as possible and will then use the discovery process to gather evidence and build your case. Evidence to be acquired may include phone records, emails, medical records, criminal histories, and drug tests if there are allegations of substance abuse. You will be aggressively represented at trial and I will make sure you know what to expect from the process as your case moves through the system. Contact my office today to schedule an initial consultation.

I understand that nothing is more important than one’s children. You should not be put in a position where you go without representation due to finances. I handle most matters for an affordable flat fee to fathers fighting for their children. This is true whether you are going through a divorce or if you and the mother were never married. My flat fee structure allows you to know what your representation will cost and prevents you from getting surprise legal bills every month. Fighting for your kids should not break the bank. Call today.