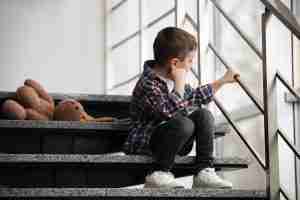 This is the next post in a series of articles addressing specific circumstances in which Peoria, Illinois fathers may seek an emergency custody modification. My previous post discussed changing child custody due to the other parent’s criminal activity. As with other emergency custody issues, a parent’s criminal activity will likely justify such a request if it puts the child at risk of imminent harm. This article will focus on another situation that may give rise to an emergency modification: a parent’s neglect of a child. When your child’s well-being is at stake, it may be necessary to take swift legal action to protect them from harm. If you need assistance in an emergency custody case, contact my office to speak with an experienced fathers’ rights attorney.

When a parent’s actions or omissions in the care of their child result in the child being in danger of imminent harm, Illinois courts will consider granting an emergency amendment to a custody order. This includes serious or repeated child neglect if the parent’s neglect is threatening the safety of the child. Neglect comes in many forms, such as failing to provide adequate food or supervision to a child. Other examples include leaving a child home alone if the child is too young to care for themselves, living in extremely unsanitary or unsafe conditions, or failing to take or pick-up a child from school repeatedly. Some cases will be more serious than others and what a court considers an emergency will differ based on the potential harm to the child.

As always, if you believe your child is in imminent danger as a result of neglect, it is important to contact law enforcement. After the situation is addressed by the police, it is important to contact an attorney as soon as possible. Your lawyer will file an Emergency Motion to Modify Child Custody and request that the court hear the matter on an expedited basis. Depending upon the nature of the neglect, the court may issue an emergency order effectively immediately. Particularly in cases where the parent was arrested or the police identified evidence of substantial neglect, a court will likely modify custody. A judge may temporarily relocate the child with the father, completely restrict or limit the other parent’s access via supervised visitation, or both pending the outcome of any criminal charges. If law enforcement or CPS have previously been involved, the court and CPS may be required to verify that the father’s home is acceptable for relocation. The court will also schedule “status check” dates to review the progress of any police or CPS investigations or criminal charges. Judges typically postpone making any permanent custody changes until the CPS investigation has concluded.

I cannot stress enough the importance of contacting an attorney prior to reporting neglect to CPS. Your lawyer can assist you in understanding the ramifications of doing so and whether or not the contact is necessary. Judges do not look favorably upon an unwarranted report to CPS. It is important to distinguish between dangerous situations versus differences in opinion over parenting styles. For example, a person’s failure to maintain a spotless house is not child neglect, however, a child’s exposure to dangerously unsanitary living conditions may be grounds to involve the authorities. It is possible that a parent’s behavior may justify a change in custody on a non-emergency basis, but not require CPS involvement or emergency custody change proceedings.

As an Illinois fathers’ rights lawyer, I have experience representing my clients in a variety of custody-related disputes, including emergency situations. If you believe your child is in immediate danger, call the police then contact an attorney as soon as possible to help expedite the emergency custody change request. In addition to Peoria, I serve clients in the cities of Bloomington, Eureka, Galesburg, Morton, Normal, Pekin, Springfield, and Washington. I also serve the counties of Fulton, Knox, LaSalle, Marshall, Mason, McLean, Putnam, Rock Island, Schuyler, Stark, Tazewell, and Woodford.